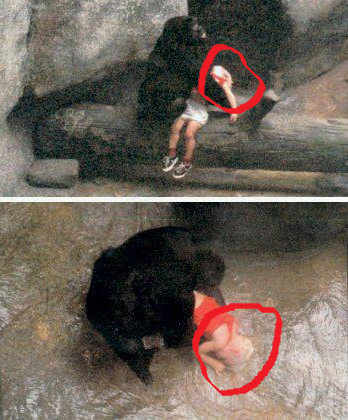 Western lowland gorilla female saved a kid
Binti Jua is a western lowland gorilla female in the Brookfield Zoo, in Brookfield, Illinois. Binti is most well known for an incident which occurred on August 16, 1996, when she was eight years old.A three-year old boy climbed the wall around her zoo enclosure and fell 18 feet onto concrete below, rendering him unconscious with a broken hand and a vicious gash on the side of his face.
Binti walked to the boy’s side while helpless spectators screamed, certain the gorilla would harm the child. Another larger female gorilla approached, and Binti growled. Binti picked up the child, cradling him with her right arm as she did her own infant, gave him a few pats on the back, and carried him 18 meters (59 ft) to an access entrance, so that zoo personnel could retrieve him. Her 17-month-old baby, Koola, clutched her back throughout the incident.
The boy spent four days in the hospital and recovered fully.